Domaine Andron is situated in the little village of Saint Seurin de Cadourne (just north of Saint Estèphe and not far from Pauillac) being neighbours of the famous chateau Sociando-Mallet. Three First Cru vineyards are within 20 minutes away (Chateau Lafite Rothschild, Chateau Latour, Chateau Mouton Rothschild).

Domaine Andron dates back to the early 19th century. It became a “Cru Bourgeois” in 1892. One of the last owners in the 20th century was also senator in Paris. The vineyard was sold to various neighbours around 1980 and the name ceased to exist.
Domaine Andron was restarted by foreign investors in 2006 and in November 2013, Domaine Andron was sold to a Chinese entrepreneur who saw the value of this hidden treasure.

In December 2013, Senior editor of WineSpectator James Molesworth came to visit Andron and in February 2014 WineSpectator upgraded the earlier “en primeur” points of the 2011 to a 89 points, very good for a difficult year and better than many of our competitors.

In winter/spring 2014 an army of workers turned the building into a pleasant house for the owner and further improved the wine-making and storage facilities to be more in line with the very high WineSpectator(89-91) and Rene Gabriel (18/20) points over the bottled years 2009-2011. The en-primeurs points for 2014 were 88-91 points.

As of spring 2015, Domaine Andron is used as a yearly case-study location for the (2 years) Master of Business and Sciences in Vineyard & Winery management by the Bordeaux National School of agriculture engineering (Bordeaux Sciences Agro). 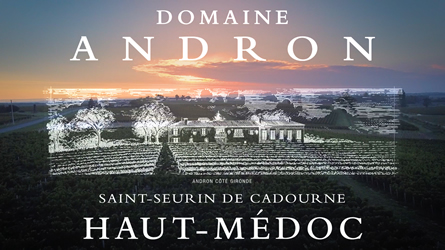 Please click above to see our corporate film in English, French or Dutch